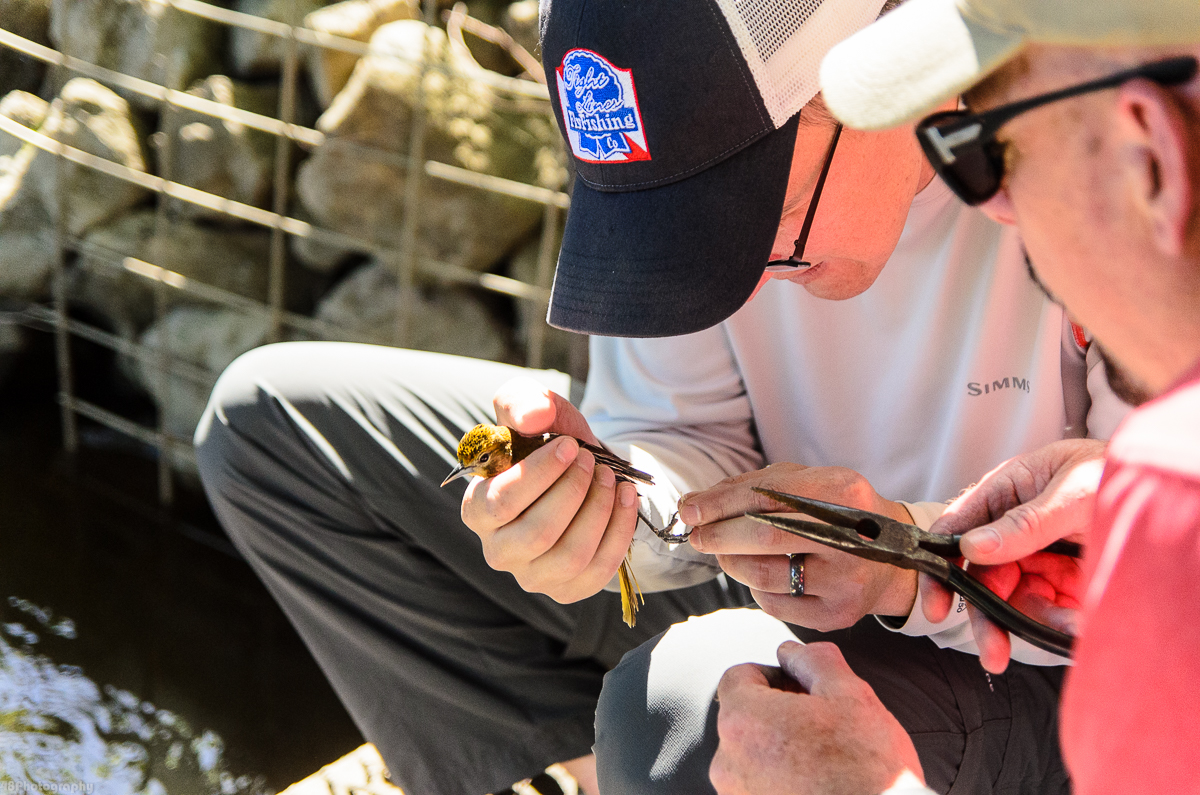 Yesterday on the river, Tom and I were floating a section I love and we hear people on the other bank making a racket. We both figured they’d got a lure stuck in the tree and couldn’t get it out. I heard the guy yell about losing the pole, so we reeled up, motored over, and asked if we could help. I’m glad we did because it saved a little bird’s life. As we anchored, the folks were telling us this bird had been caught in the tree for an hour or so and they were wanting to humanely euthanize it as they could not get to it and did not want it to starve in a tree. They said its mate had come back a few times and had sat near it in the tree, They then told us they’d gotten an air rifle and shot it multiple times but it turned out nothing was exiting the gun so they’d got a catfish pole and taped a fillet knife to it. Luckily they couldn’t reach it and the pole came apart and was also stuck in the tree. I asked if I could take a look and see what we could do. We positioned the boat, which was tough to do there with the trees and current. I stacked my Yeti on the back storage compartment of the Hog and I still had to reach as far as I could to even get close to it. I was able to cut her from the tree and that’s when I saw that she was badly tangled on one foot with a bunch of very old braided line.

I got out of the boat and sat on a dock with the bird and the gentleman named Bill came down to help me. We were talking as we were trying to cut this crap from the bird using a multitool my brother had given me after he got home from Iraq. I told Bill I carry it with me on every trip on the water. He tells me how he was an Army Ranger in Vietnam around the time of the Tet Offensive. My guess is he was LRP because he mentioned seeing some shit after two tours in that country. I never know what to say to a veteran who’s been in the shit, so I said I’m sorry. He said, “Thank you. Let me do the cutting.” The scissors in the tool were not cutting the knotted braid so we had to use my pliers and try to avoid cutting her leg off at the same time. I don’t remember Bill’s face much. I do remember his hands though. I stared at them for a long time as we cut the line from the bird. I got to thinking how those hands might have done things in a war but now they were helping save a life. Our duality sometimes amazes me.

Tom snapped this photo as we were getting the last of that braided line off of her foot. After a quick check to make sure we’d not missed anything, I opened my hand, she sat there for a second, and then flew back up into the tree above us. Her leg did have some damage, but we were pretty sure it’d heal and she’d live out her little bird life doing bird things on a river.

I’m not a religious person at all but after Bill and I shook hands he told me, “Those pearly gates just opened a bit wider for you today.” I smiled and said, “Thank you.”

Earlier in the morning, Tom and I pulled out a large plastic tote bin that was jammed on a tree and also removed a hundred or so yards of old monofilament from the river as well. We might have not caught a single fish but it was a damned good day on the water.