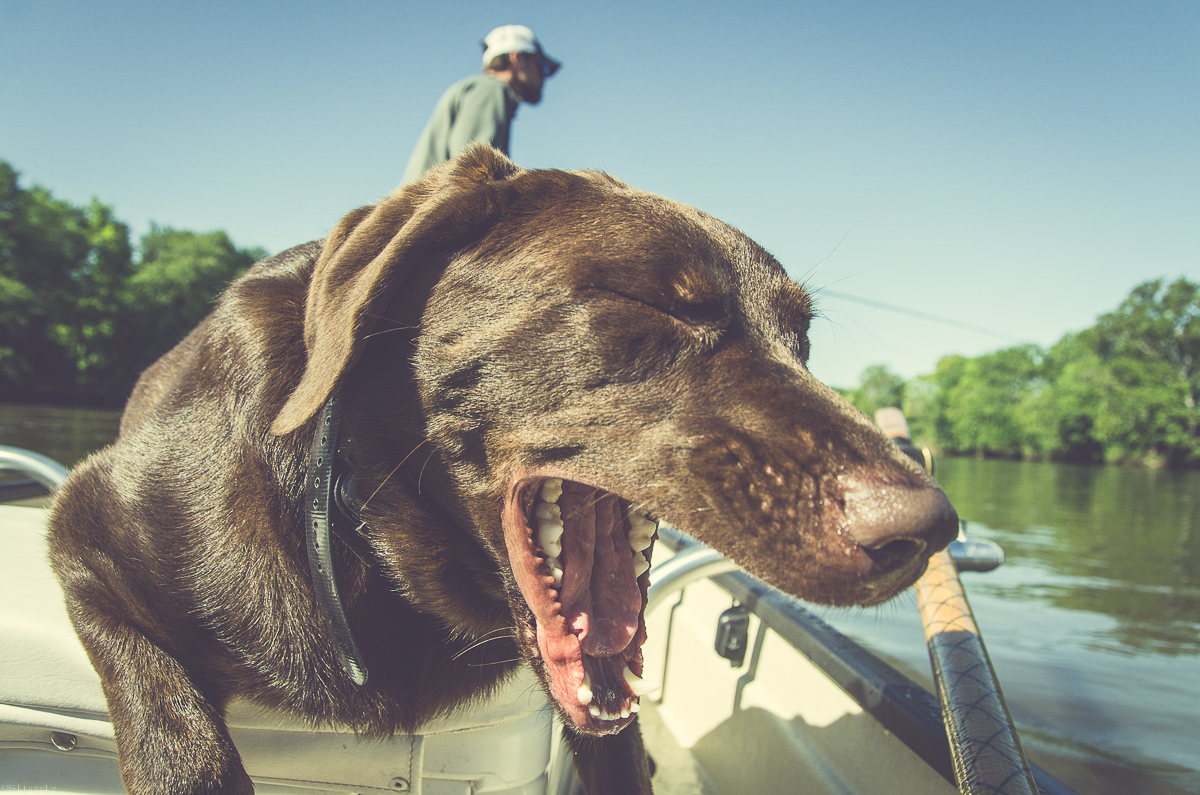 I’m a half pot of coffee in and I’m looking at pictures I took this past weekend. If you saw them they’d show you that the fishing was okay but there’s more dog photos than fish so it must have slowed down at some point. I know exactly when it slowed on one river. It was about 8:30am Saturday when the aluminum river boats running jets across the rock gardens at 30mph started showing up in their usual droves. We were floating a very productive section when we’re passed by multiple boats in rapid succession, all heading towards the dam. Now, for the folks who don’t fish my local haunts, this is not a wide body of water in the least. In some places barely a few hundred feet across. It’s shallow, it’s rocky, and in the minds of some folks it’s a NASCAR track.

When you run up and down a small river at high speeds you are bound to create wakes. Those wakes smash the banks of the river. After a day of this, the water looks like chocolate milk 5 feet out from the shore. I’m no scientist but I’m guessing it doesn’t help erosion in most cases. I know sure as hell that it turns the fish off until the water clears. This brings me to common courtesy and river etiquette. What happened to it? Did it ever exist or have people always been assholes? When I was a kid my grandfather would take me out fishing and he’d slow down when passing a boat that was moving slow or anchored. He said, “respect their space.” and “treat other people on the water like you want to be treated.” He’s a smart man.

From my grandfather I learned never to fly past a person who is anchored, who is floating, or hell even bank fishing. Slowing down your boat takes seconds and it’s the courteous thing to do. I’ve seen fights on the river, I’ve been involved in yelling matches, and it’s solved nothing. I’ll ask an inconsiderate asshole to slow down and most times they’ll look the other way as they continue on their way. Sometimes they flip me off. Sometimes we exchange words. I keep a running count of people who do slow down and don’t pass at full throttle within 30 feet of my boat and it’s 1. 1 single guy passed me last summer and slowed down. His son asked, “Daddy why did you slow down?” and he responded, “Because it’s the nice thing to do for people on the water.” I thanked him and he smiled and waved. It was a nice encounter that is almost non existent these days.

In this day and age where entitlement runs high it’s an easy thing to forget about other people’s feelings. I’m a really easy going guy, especially on the river where I try to find some balance in life. I hate leaving the river hating humanity more than when I launched my boat.We seem to live in a me-me-me world and think nothing of our fellow humans. If you’re guilty of flying past fisherman on a float just think about how you’d feel in their shoes. You’re slowly working that section of river and suddenly a boat roars past causing wakes and scares the fish for hundreds of feet. That turns the bite off. I hear people say, “Oh the fish are used to the sounds of the motor.” No. No they’re not. If they were fishing would not shut off at sun up as the Dale Jr’s of the river start their engines. Next time you’re flying down the river enjoying your time on the water make sure you’re not wrecking someone else’s time on the water. It’s not new math and it’ll make you a better person at the end of the day. I’ll give you a thumbs up and hell, might even buy you a beer if I see you off the water.

Don’t be a dick should be everyone’s mantra. It would go a long way in solving a lot of problems we face in this world.