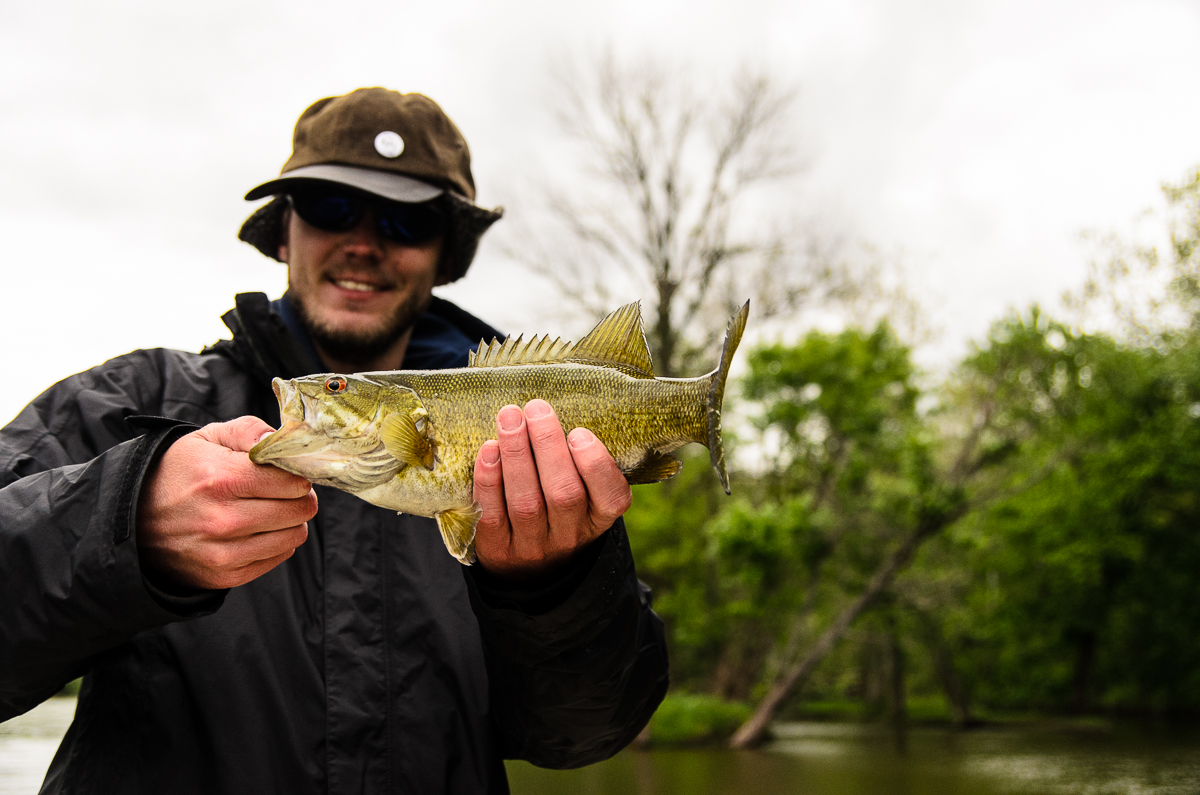 This weekend a gnarly cold front came through Indiana. Of course it blew in on a weekend that had been penciled in months back. There was no rescheduling this one and when I woke up Saturday morning I kept waiting to see my phone light up with a “Hey man, we’re gonna cancel this one.” Luckily they decided to deal with the bad weather in hopes of catching some fish. The temps had dropped out 15 degrees from the day before. The winds were steadily blowing 20 mph and the air temp was in the high 40s. Adding it all up was a feels like high 30s and the gusting upstream all day just compounded the cold. The water felt pretty warm at this point. I can’t remember the last mid May when it did this but when Ma Nature throws bows, you duck and hope you don’t end up with a hook in your head.

We launched and they got to casting. About ten minutes in, Billy picked up a smallie and not long after, a white bass. He’d never caught a whitey before so that was cool to see. We floated through areas that had been producing recently with no luck. After a lunch break, I gave them the option of floating down to the next takeout or motoring back up and re-fishing. I had just received my new oars a few days before so I wanted to spend some time on them. With the cold front and being a realist, I wasn’t too optimistic that we’d see another fish, but there was zero traffic on the river besides a flotilla of kayaks that had passed us as we were eating lunch. Might as well give it the old community college try. The conditions were tough but Tom and Billy soldiered through in good spirits which was awesome to see. I’m not used to wearing November layers in May. It’s usually flip flops and sun screen all day by this time. Then again, I’m in flip flops as soon as the snow melts. A few hours down the river, Tom picked up a healthy smallie on a minner pattern and we started getting our hopes up again. Hope springs eternal in a fisherman’s brain. We’re always searching for that electric shock of life on the other end of the line. It’s a drug and a damned addictive one. Billy and Tom kept on fishing hard throughout the day. There were a few bumps here and there but no more fish were brought to hand. There was an amazing hatch going on all day which was cool to see. Big mayflies, small mayflies, and what I’m pretty sure were small stone flies were all coming off. Can you tell I’m not a bug guy? I should sit down with a book someday and learn our local river bugs but that’s for winter when the smallies are in their holes and the fireplace has a roaring fire. After 8 hours on the river we called it a day and motored out. Big thanks to Billy and Tom for making the best of a crappy situation. We had a good time in spite of the left hook from the weather.

Sunday night I got home from a retirement party. Yep, I’m getting the age where some of my older friends are retiring. I’m still 18 in my head. I had watched the weather and flows all day. 5pm was going to be the warmest part of the day and the winds would die down. The flows were on a drop too. Perfect. I got home and called my buddy Don up. I think the conversation went something like this…

“Honey, can I fish? (quiet talking as he cleared a few hours on the river) She knew it was fishing when I said hey Dave. How long does it take to get there from your place?”

“25 minutes. I gotta load a few things. Boat’s still hooked up. I gotta tie a few flies and I’ll text you in twenty.”

After a quick fly tie session, Finn jumped in the truck, I texted Don, and headed to the river. The weather felt a hundred times better than the day before but it was still chilly. The water temps felt like they’d plummeted. It was gonna be a crapshoot but shooting crap is better than sitting at home getting fat and old in front of a television. Don hadn’t been out in forever so I rowed him a bit while we chatted and caught up. We didn’t catch any fish but he wasn’t at home messing with wallpaper and I wasn’t losing my mind weeding stickers like I’d done all morning.