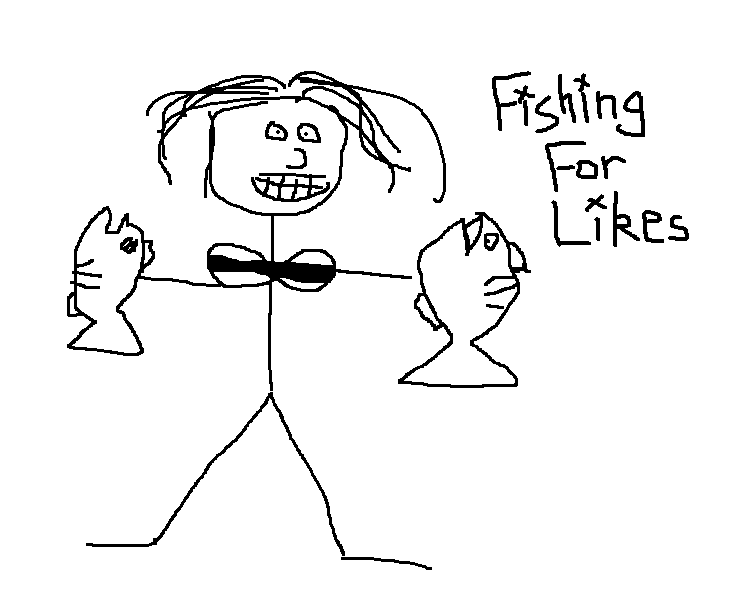 Let me start off this rant with a statement. I’m probably going piss people off with these words. Certain demographics might think I’m totally off base, but this shit just grinds my gears and I’m gonna go out on a limb and take a wild stab in the dark that it pisses a lot of other folks off too.

Here’s a test. Go to instagram. If you fish, the algorithm will have your search icon loaded with suggestions on who to follow. Scroll through them. What do you see? I see old men skateboarding like we’re still in our teens. I see folks fishing. I see tattoos, art, punk bands, hip hop groups, dog stuff, and random memes. Then you see it. Some random twenty something in a thong holding a fish. Cool right? My heterosexual brain says, “half naked woman? hell yes!” and then my logical side screams, “what kind of precedence does this set for future female anglers?” and the logical side is the side I defer to. Don’t get me wrong, I love the female form. I’m a big fan of it. I’d be lying if I said otherwise. I’m also not advocating not fishing in a swimsuit if it’s hot as hell outside. That’s not the case here at all. If it’s hot and you don’t want tan lines, fish naked as the day you were born for all I care but don’t post that shit to social media to get “likes”. This isn’t me saying don’t fish in a bikini. If you dig fishing in one, hell yes do it. But when your feed looks like nothing but booty shots and creepy comments from random dudes, just think about the image you’re portraying to the youth, specifically young girls. Hell, I’d be really creeped out of if random women left comments like the shit I see dudes leaving women out there on the intertubes. That can’t give you the warm and fuzzies. I have friends with young daughters who are getting into fishing. Think of how empowering it is for them to see a confident, yet clothed and not objectified, female angler with the chops to catch anything that swims. That’s awesome. Why is it awesome? Because they’re actually fishing. Think about it. That’s what guys get to experience. You don’t see shirtless dudes all jacked up on protein shakes looking like that goofball from that glittery vampire movie holding fish with a sultry grin. Why do we see the female equivalent all over the social medias? Some folks might say, “where the hell do you as a man get the right to say what a female can and can’t do?” and I’m right there with them. I don’t have the right, but I have an opinion. Opinions can be ignored.

A social media “like” is something as nebulous as a fart in the wind. Seriously. What the hell can you do with a “like”? Can you fill up your gas tank? Buy a new reel? Buy a fancy new fly rod? No, no, and no. You can’t do jack and shit with it. It’s the monopoly money of the internet.

Now, think about up and coming anglers. Both male and female. They’re inundated with these images day in and day out. They become the norm to them. They’re not the norm. Thonged out booty shots of women holding fish are the Bratz dolls of the generation who grew up with said dolls. I feel sorry for the little girl who is super stoked on fishing who sees this and thinks that acting or dressing a certain way is THE way to be. Instead of being herself, she dresses like what she sees. She’s no longer in waders or fishing pants and a shirt. She’s half naked for no reason. It stops being about the fishing. It becomes something else entirely. That’s not cool. If you’re a female and you fish, you’re a female who fishes. It’s a pretty simple mathematical equation. Two plus three does not equal chair here. You don’t magically get better at fishing by your lady parts flopping out for photos just like I wouldn’t get better at fishing if my dangly bits were dangling for all the world to see. You might gain followers on the internerds ( I wouldn’t), but you lose something along the way. Sometimes, you can’t get that back. Remember that your sex has nothing, and I mean nothing, to do with fishing. A fish does not care if you have boobs and a fish does not care if you’re John Holmes. I’m not sure what fish care about. Maybe their next meal, but even then I doubt it. Their brains are pea sized.

Young dudes. As a former young dude who is heading into his 40s at an alarmingly fast pace, listen up. You’re propping up bullshit every time you click that instagram heart or like something like that on facespace. You’re enabling people who may or may not actually fish to cause up and coming female anglers to devalue themselves. Stop. It’s pretty simple. Just don’t click the heart or the like button. That’s really it. I know, logically, that it’s a pipe dream. Sex sells and it always has. I like to think we’re better than that, though. Women anglers can and should be just as respected as a male angler without resorting to strip club tactics with fish.

As a quick aside: Be proud of your body but not at the expense of fake internet points. Beauty fades with time but your skills as an angler get better with time.