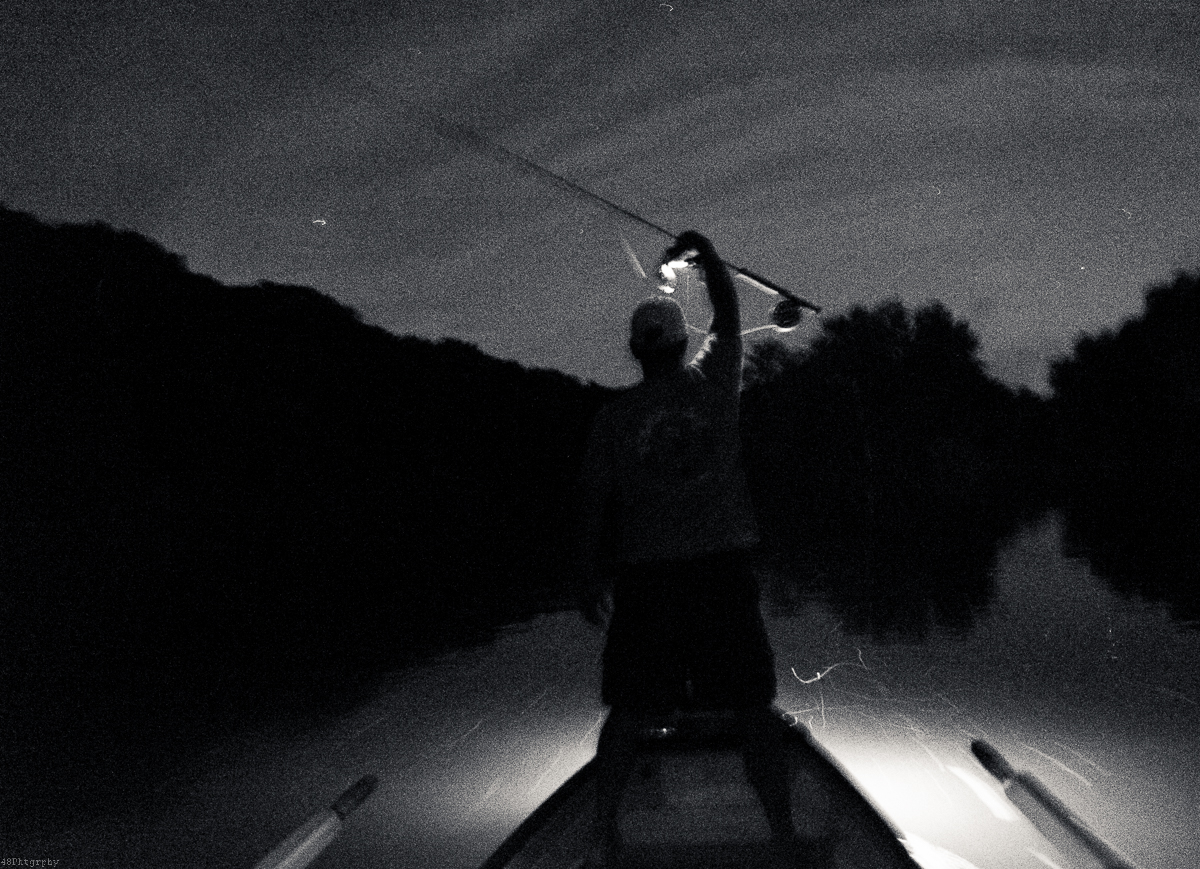 I’ve always loved night fishing. When I was a kid I remember sneaking off and drowning worms under a bobber at a local pond when respectable citizens were sleeping. I don’t remember really catching anything in that pond. A catfish or a crappie here and there but that was about it. I’m pretty sure it had to do with the tons of lead shot in the water from the pond’s former life as a trap shooting area. Growing up in an area where the environment has been wrecked for progress – you take what you can get.

There’s something about being on the water as the sun goes down, watching that last sliver of light winking out like a snuffed candle. You truly feel a little smaller in stature as the darkness sets in around you. Your cocksure attitude on the river turns a bit more cautious when your vision is limited to a few feet around your boat. The rocks seem a little taller and a bit sharper in the dark. I like to think of it as nature telling you that she’s still the boss. Summer floats on the river sometimes provide the best fishing you’ll see until the fall feedbags are strapped on. The big fish move from their holes and start cruising for food. The mayfly hatch is so thick you take smaller breaths so you’re not choking on them. You squint a bit to keep them out of your eyes. The bzzzzzz of a bug in your ear becomes common. These damned bugs are everywhere and on everything and if you’re like me, you don’t have dry flies in your fly box. Hell, you don’t even have a nymph, a scud, or hell anything tied on a hook smaller than size 2. Fuck it. We planned on poppers at night. We’re going to fish poppers at night.

This float is around 5 hours under normal circumstances. That’s fishing fairly quickly with little backrowing except to keep the boat aligned. I’ve stretched it into 14 hours and I’ve made it as short as 3 hours. It really depends on the fish. At night, 5 hours can seem like an eternity. At 10pm it’s starting to get really dark. River dark. You come up on houses and they might have a light on, some have parties going on, some really have parties going on. You get cat called from the ladies who love to “WOOOOOOOOOOOOOOOOO” when drunk. The same ladies who have smoked since ’78 and sound like they gargle gravel. Their husbands are sitting in plastic chairs near the fire tipping back some cheap watered down beer and calling it the best damned thing to happen to America since John Wayne. They yell out encouragement if they see you. Sometimes you hear the random comment about “oooh they’re fly fishing, that’s so weird.” and then it’s back to black. The moon and the sounds of the night close in. You see eyes on the banks as the raccoons, deer, and who knows what else come down to the river to drink in relative safety. The raccoons don’t seem to be bothered too much by the river rats in Poison ’85 tour shirts. A fish is picked up here and there. They can come from anywhere at this time. Lots of cruisers over the rocks. The beasts do indeed hunt at night. There’s another type of beast to be aware of at night on any river. The drunk river rat. These types of beast are usually a white male, 30 to 60 years old, who has knocked back a few too many and gets the idea into his head that running his river jon at full speed with no lights on is a smart thing to do. I’ve encountered this subspecies of man a few times on the water. They’re definitely not as rare a sighting as a sascrotch or a double breasted canoe flasher. A drunk river rat is surprisingly dense and does not seem to learn from previous mistakes. Lower units are not a drunk river rat’s best friend.

The history of drunk river rats can be traced back to the dawn of alcohol, boating, and stupidity. They followed the trails blazed by humanity’s best and brightest throughout our species’ journey out of Africa and across the plains of the world. Their progeny hopped ships bound for the new world and after much breeding, in and out, we’re left with today’s version of the drunk river rat. A curious creature who sees no harm in flying down a dark river with no regard for anyone else’s lives. We had a run in this weekend with two of these creatures. They were running flat out around 11pm at night. They had no navigation lights on and they were motoring straight at us. We started screaming at them. I started rowing for the shore to get to some sort of safety. They change course and head towards the shore. We’re still screaming when they finally come to a stop not far from us. They seem confused. It’s eerily reminiscent of watching an ape charging a primate researcher only to check themselves right before the collision. They didn’t respond to our very easy questions from our boat. They started with “WHAT?!?!” and ended with “THE FUCK?!?!” The drunk river rats continue on down the river. The motor is cranked back up and the navigational lights are still not on. The drunk sitting on the bow of the boat would be rocketed off the front if they do indeed hit a rock. We kind of hope they do hit something and disable their boat but luck seems to smile on people like the drunk river rat.

The sound of their motor slowly disappears around the next bend. Our adrenaline is pumping and all the peacefulness of the night float is gone. We’re on edge waiting for more drunks to come down the river at us. We’d seen them heading upstream earlier in the day, it only makes sense they have to come back down. Thirty minutes or so later we come upon a gathering of drunk river rats and the boat that almost hit us is tethered at their dock. We hear their drunk babbling, we hear the drunk river rat women “WOOOOOO’ing” every time Freebird comes on. A dog barks. My buddy and I look at each other and shake our heads. Every damned trip is an adventure on this river. He goes back to casting and picks up another fish or two before we call it a night.